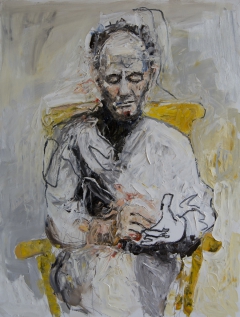 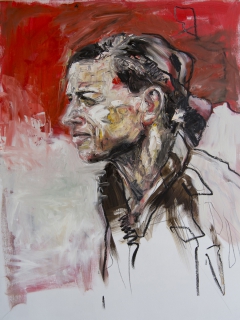 The work process, which is most difficult for me to create a good picture: The forming of a portrait. It’s not about imaging or artistic refinement. It’s about a piece of soul, a small atomic nucleus, which brings everything to wing. „Yes, I’m recognizing this person“.

They’re talking to me, or, nevertheless, don’t want to speak. Then I’m looking for gestures, for emotions. Necessarily they don’t have to sit for me. There are enough talks, texts, pictures, sketches, works, interviews… somewhere the connection exists as a small thin thread. I only have to find it and trace back. No notion, which thread I will get, the pensive one, the sarcastic one, the raging one. There are so many of them.

There are people impressing me briefly, but in fact they’re absolutely unsubstantial. There’s no loom, only a coloured finished carpet, at best for a soft barefoot feeling. Those ones I have to give up.

I’m looking for those, who never will be finished, who are seeking, growing. The incomplete, hoping, sad, ambitious, crusty, enthusiastic, staggering. The living ones.

The origin of such a portrait is extremely time-consuming, the involvement with the character, even for days in spirit. Several sketches are following, until there’s a feeling saying „Right“. The work is arising, fast with a knocking heart.